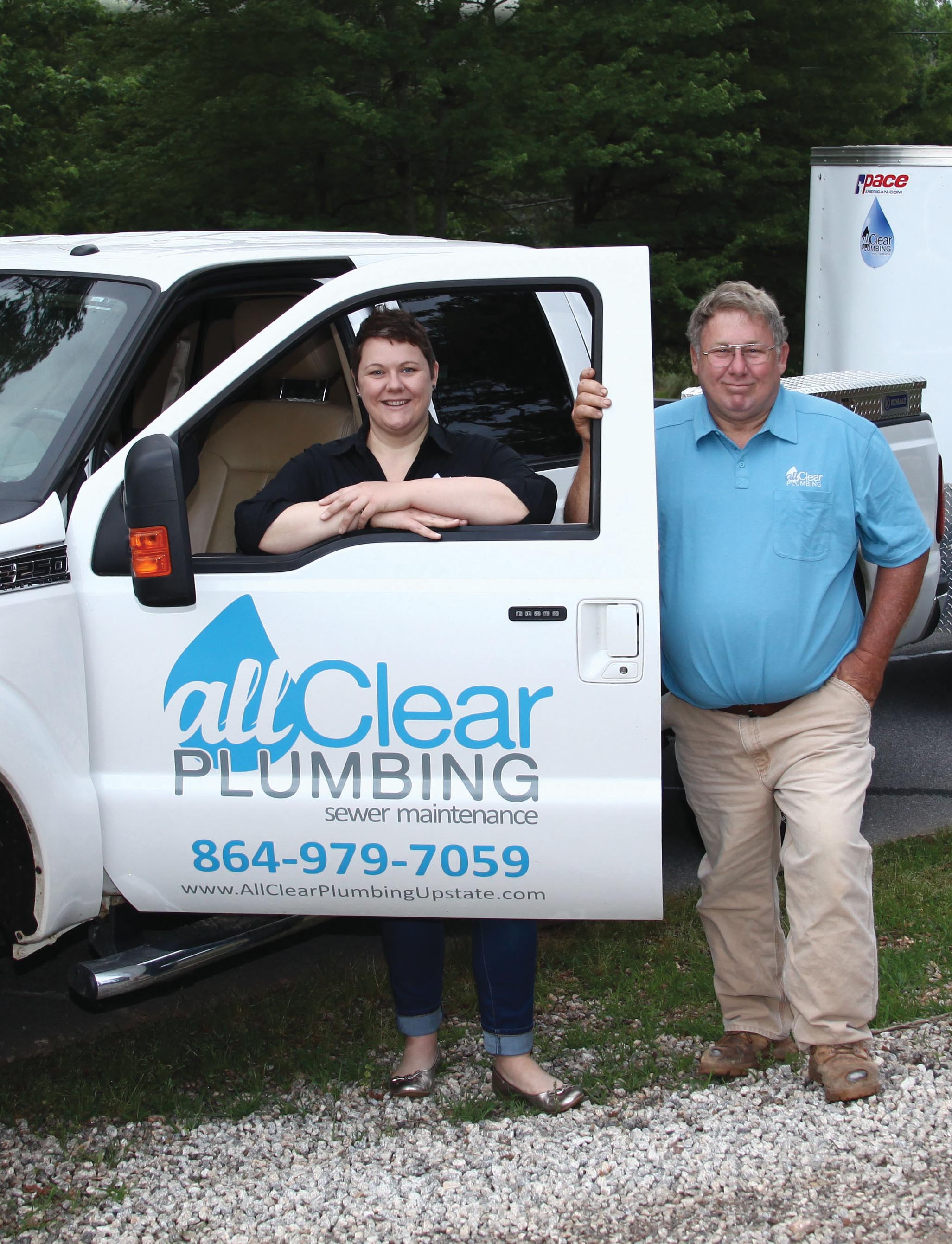 Anja Smith, with father Scott Smith of All Clear Plumbing

Adding Value to the Workforce

From the corporate world to a tech startup to the family plumbing business, Anja Smith is using her experience to advocate for the industry.

Growing up, Anja Smith wasn’t told that she had to go to college.
Instead, as the daughter of a plumber, she was told she had to learn a trade.

“As a tradesman’s daughter, I definitely had a little bit different mantra,” she says. “My parents never detracted us from going to college, but instead, what I heard over and over again was, ‘You can do whatever you want, but you have to learn a trade. You have to have a useful skill if you’re going to go into the workplace or to college—it doesn’t matter. You have to add value to the workforce.’” 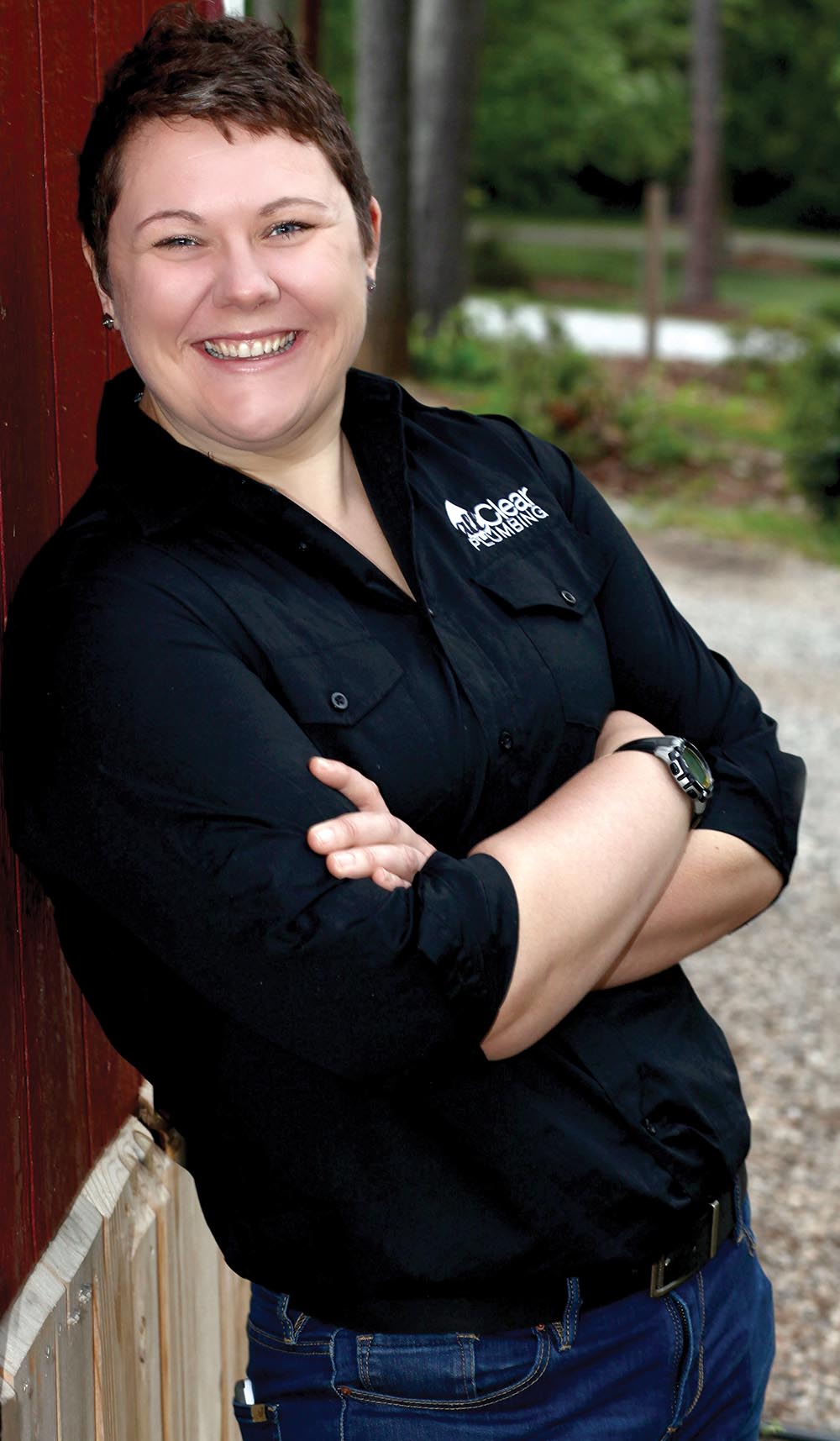 “When Dad decided we should start the plumbing business, I was immediately very excited about it, because it’s such a good trade and there’s so much opportunity,” Smith says. “It’s about as recession-proof an industry as you can be in these days.”

Smith says she took a “meandering path” after high school, including some time in the military and at a community college. “I went into the workforce unskilled, against my parents’ advice, but it didn’t take me very long to figure out that wasn’t going to bear much fruit,” she says. She went back to college and learned a skill—graphic design—and entered the professional world.

“I worked for corporate for a little while and really didn’t like it,” she says. “I knew I didn’t want to be sitting behind a desk in corporate America. I wanted a little more freedom.”

In 2012, Smith’s father, a master plumber who had been working for a franchise, decided to start his own business. “He was lucky enough—that’s how we like to phrase it—that he had a wife who comes from the world of finance and has an operational background and a daughter (Smith) who has a graphic design and business background,” she says, adding that when he started the business—All Clear Plumbing—all three of them were owners from the start.

“When Dad decided we should start the plumbing business, I was immediately very excited about it, because it’s such a good trade and there’s so much opportunity,” Smith says. “It’s about as recession-proof an industry as you can be in these days.”

Putting business skills to use

In the beginning, Smith’s father was the only full-time employee, with everyone else pitching in as they could after their day jobs. By early 2016, he was ready to bring in another person full-time to help run the office. “There was never a question of whether or not I would join the business,” she says.

All Clear Plumbing now has eight trucks and 18 employees. Smith is also secretary of the Plumbing Heating Cooling Contractors (PHCC) of South Carolina, and is on a few committees with PHCC national.

“We got involved [with PHCC] because we were looking to implement an apprenticeship program and they were the recommended educational resource,” she says. “When we realized it was an opportunity to be a leader in the industry and lend our considerable opinion to some of the issues facing our industry, we really jumped on that. We believe that if you’re going to complain about something, you have to be willing to do something about it. That’s why we stay involved.”

All Clear Plumbing’s apprenticeship program came about when Smith, who handles hiring for the company, was having difficulty finding experienced workers. “I was talking to my dad one day and I said, ‘If this is this bad right now, how bad is it going to be in five years? These issues are just going to continue to multiply.’ The more I looked into the problem, I found out this isn’t just happening in Greenville, S.C., this is a systemic issue that’s nationwide and expected to get worse,” she says.

“We said, ‘We have to do something about this, but how can we, as a small company, hope to have a training program?’ There are no schools in the area that teach plumbing. No one’s going to do this for us.’”

Training the next generation

Smith began investigating the options, and came upon PHCC Educational Foundation’s Apprenticeship Training program. “We liked a lot about it,” she says. “So much of the work is figured out for you. There’s a model to follow.”

Because they register the apprenticeship program with the Department of Labor, Smith says, it adds a layer of credibility that helps attract better talent. “We’re not hiring people who are responding to a $10 an hour helper position that has no clear career path,” she says. “We’re hiring guys who know they’re making a four-year commitment to the program, they’re expected to do schoolwork, there’s a career path clearly laid out for them, and the promise that they’re going to work hard, but also that they’re going to have a trade no one will ever be able to take away from them.”

Smith has spent a good deal of time advocating for workforce development, speaking at schools and other events, getting in front of as many people as possible.

“I think every Kiwanis Club and Rotary in our general area has heard from me,” she says with a laugh. “I’m just trying to get the word out that this [apprenticeship] program exists, because it’s not a mainstream option. It’s not like your high school counselor sits you down and says, ‘Are you thinking about college or are you thinking about an apprenticeship path?’ I’d love to get there one day.”
All Clear Plumbing currently has a mix of plumbers and apprentices in the field. “One of our apprentices is third-generation and another is fourth-generation. Their fathers have been plumbers for us,” she says.

In her time advocating for the industry, Smith has seen some progress. “I do think things are changing,” she says. “I’m in middle schools and high schools working with the counselors, and the conversation has definitely changed.”

Smith also thinks there might be a shift toward more women joining the industry due to girls being proactively included in the STEM (science, technology, engineering, and math) conversation. “I think that might be the game changer—getting women [to a point where] being in a technical environment, being in a hands-on environment, is part of the comfort zone,” she says. “Those kids are just starting to graduate high school. The girls from elementary and middle school were being proactively engaged at that level.”

Greenville County (S.C.) Schools holds a career fair for seventh graders each year where they explore six major career pathways that will help guide their schooling through high school. “Kids are definitely being made aware of career choices and what that means from a fairly early age,” says Smith, who attends the career fair and talks to kids about the plumbing industry.

A lot about the industry, says Smith, is still how it’s perceived. “We’re still working on turning the ship around on what it means to be a plumber,” she says. “I think that’s going to take some more time.”

Anja Smith’s father, Scott, started All Clear Plumbing in 2012. A family business, they now have eight trucks and 18 employees. 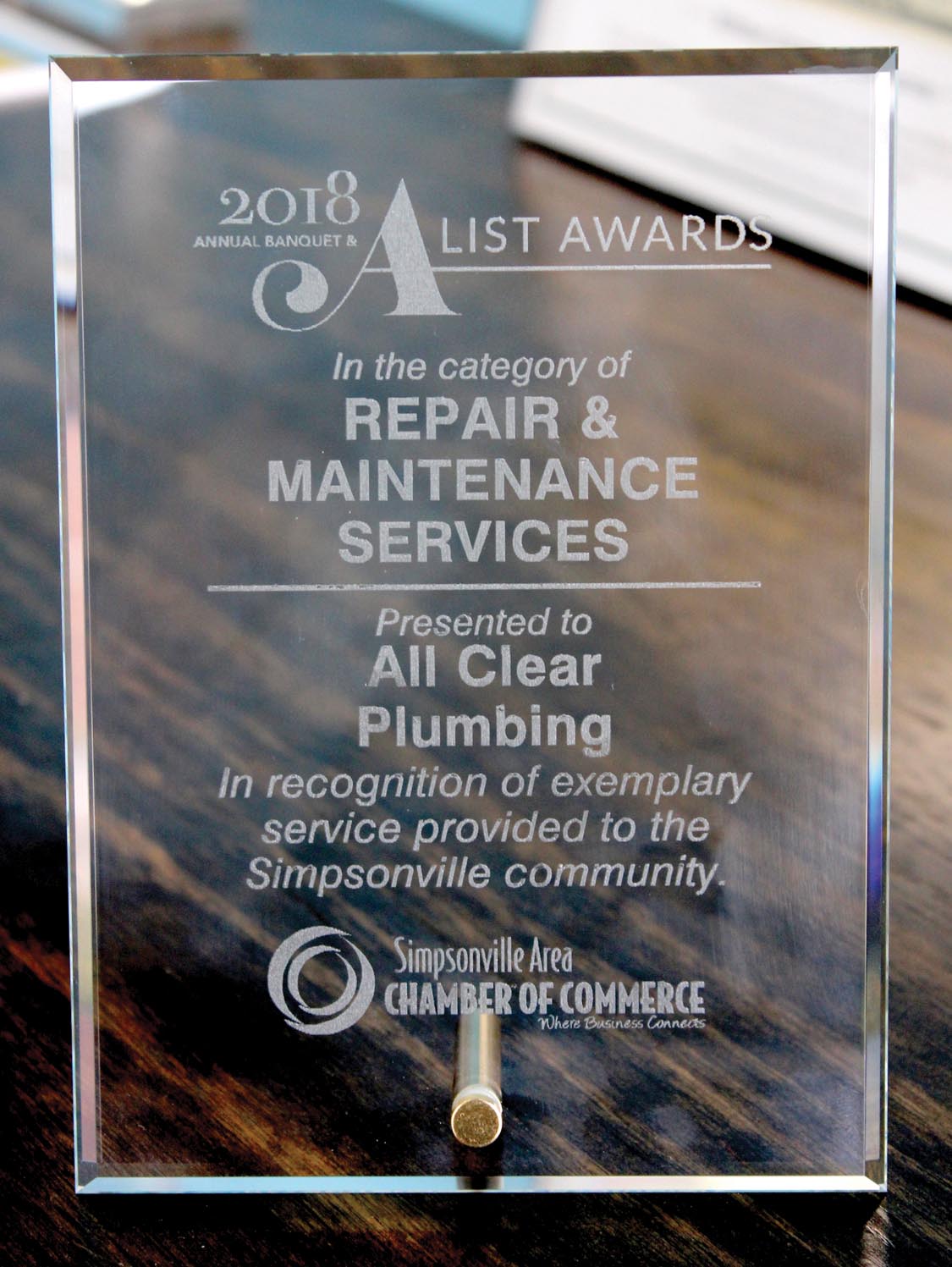 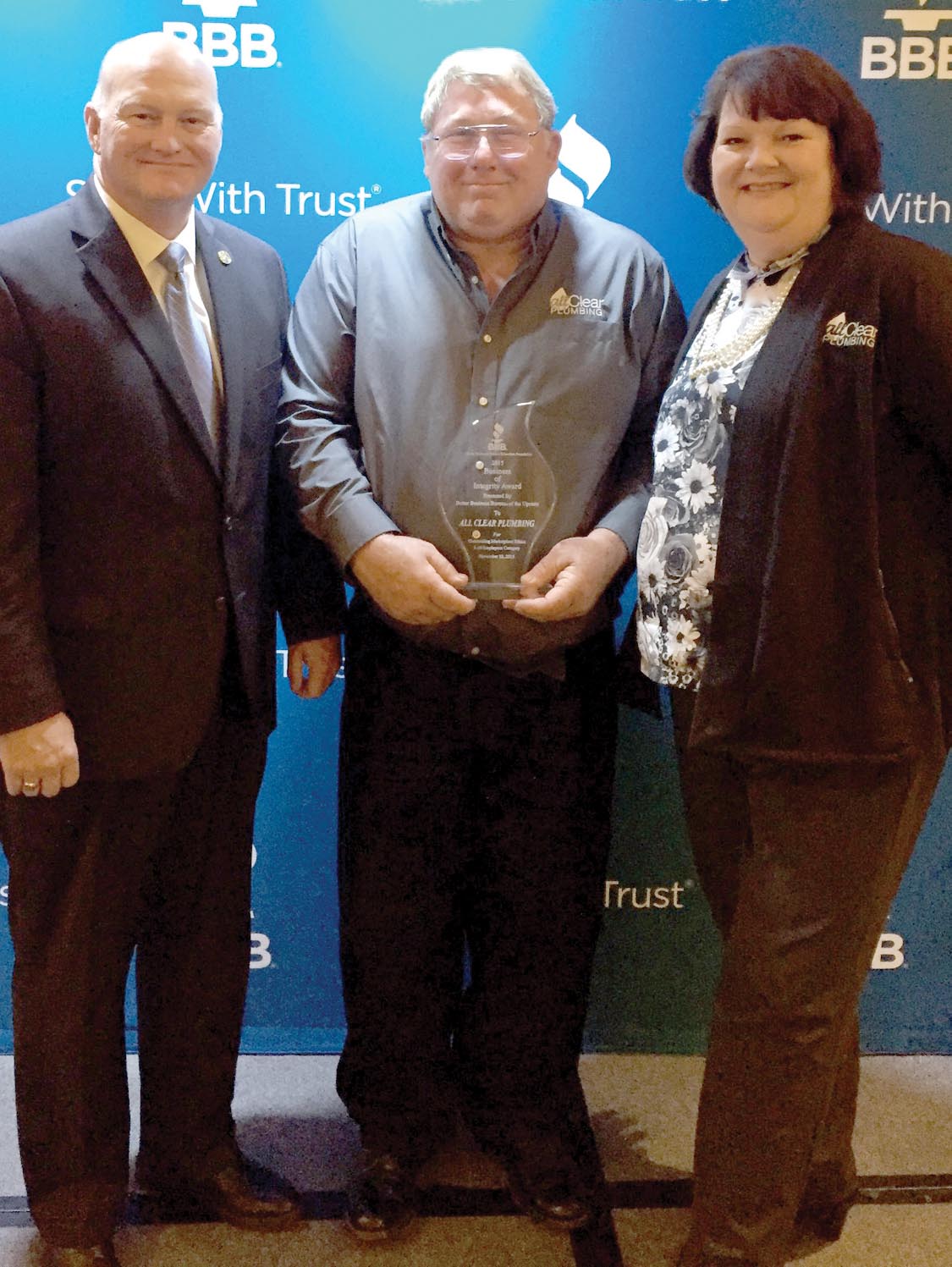 For more information about All Clear Plumbing, visit allclearplumbingupstate.com.