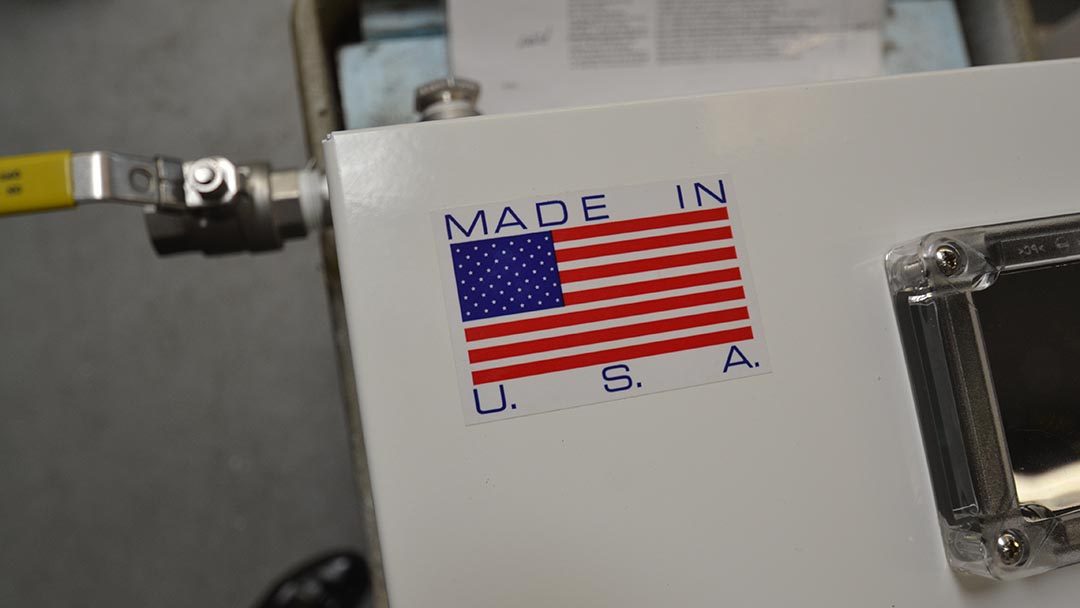 Depending on how old you are, you may remember Victor Kiam in the 1970’s so memorably pitching in TV commercials for Remington, “I liked this [shaver] so much, I bought the company!” I don’t know if we’ll be seeing Frank Stiebel pitching his new commercial line of tank- less water heaters on TV, but the story- line would certainly match.

A conversation with Frank Stiebel at the 2019 AHR Show in Atlanta this past February led to an invitation for Southern PHC Magazine to visit Stiebel Eltron’s recently acquired manufacturing facility for high capacity, commercial tankless in Sarasota, Florida.

Some may not realize that Stiebel El- tron, founded in Germany in 1924 by Theodor Stiebel, is Germany’s largest producer of electric tankless water heaters. Theodor’s son, Frank Stiebel, co- owner of Stiebel Eltron GmbH with his brother Ulrich, and president of Stiebel Eltron USA, wanted a more robust line of commercial tankless water heaters to satisfy customer requests for large capacity tankless electric water heaters. This includes a product line with units for drench shower, eye wash, commercial kitchen and many other commercial/ industrial three-phase applications… none of which Stiebel Eltron previously supplied. Frank Stiebel had heard about Tankless Inc. located in Sarasota and knew they produced residential water heaters, but what piqued his interest was their three-phase commercial line of products that are of simple design but very rugged and reliable. Stiebel Eltron enjoys a devoted customer base for their high-quality residential and commercial application point-of-use lines of electric tankless water heaters, but customers wanted those same high-quality units for high capacity commercial applications. In searching for a solution Frank found Tankless Inc. in Sarasota, FL. It was a small facility with a handful of employees, but they were turning out hand-built, very durable and dependable residential and commercial units. 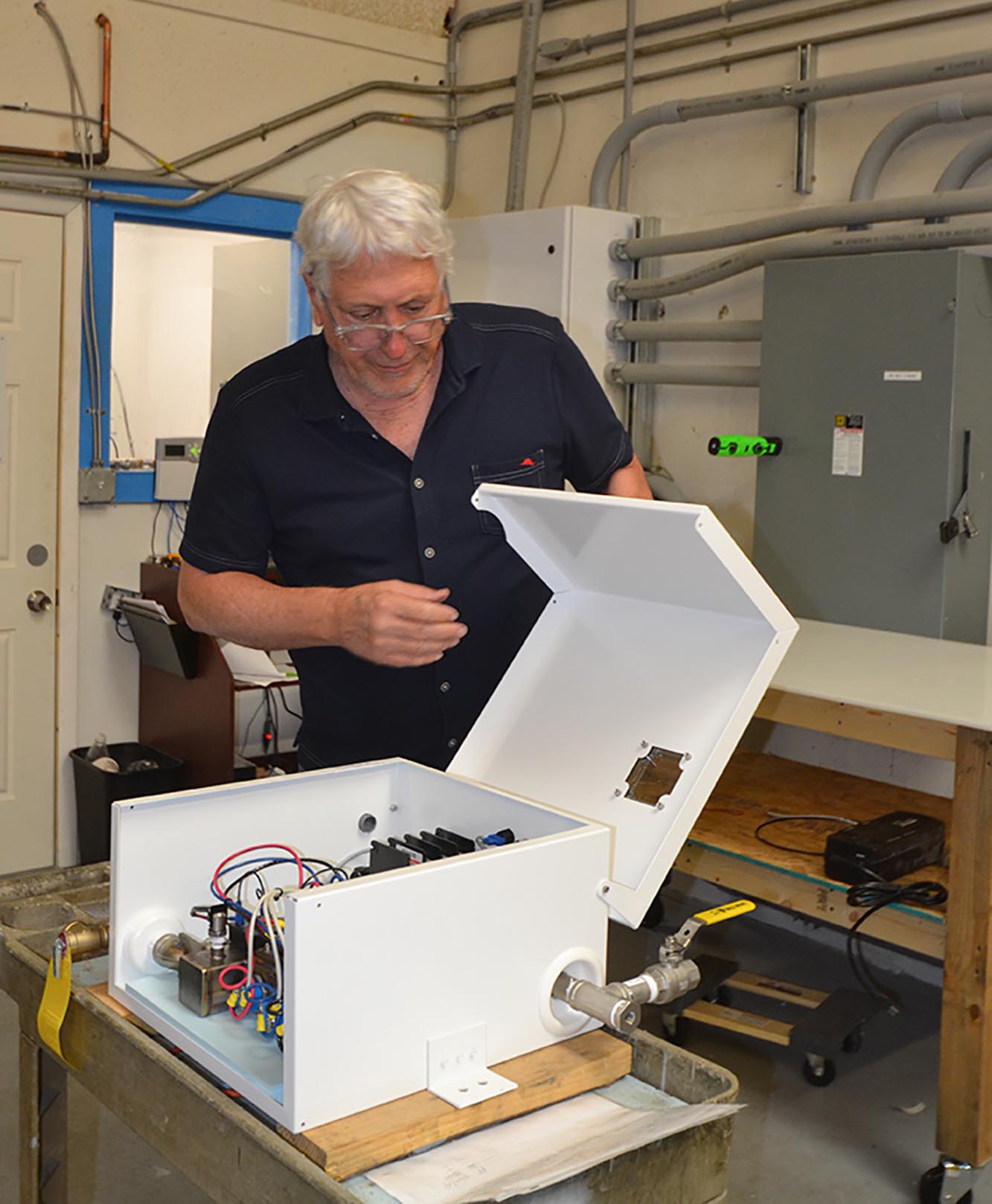 So, Frank bought the company. 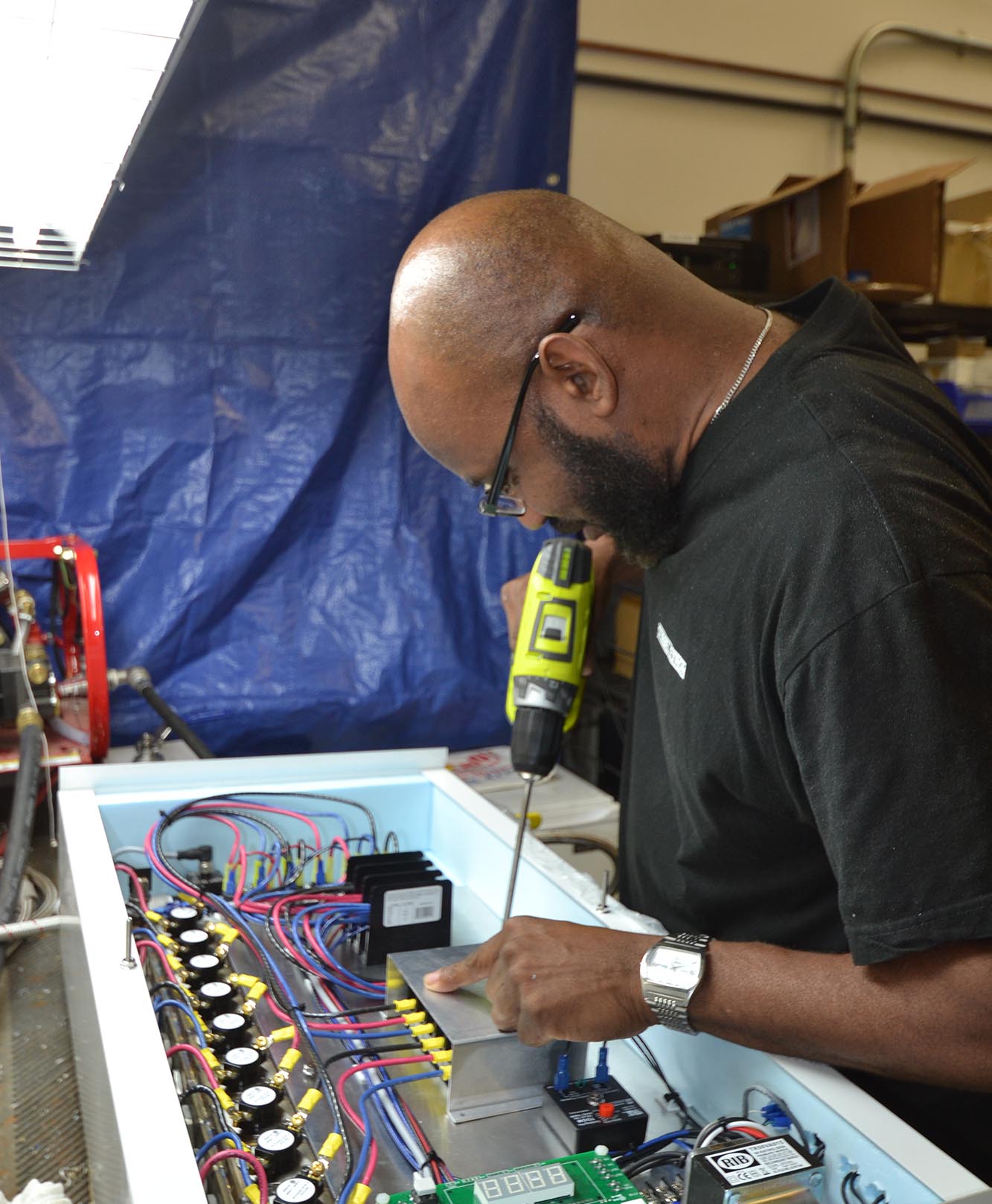 Lawrence Moore (above) and Chris Tarpley (below) are the chief assemblers for all units produced at the Sarasota facility. 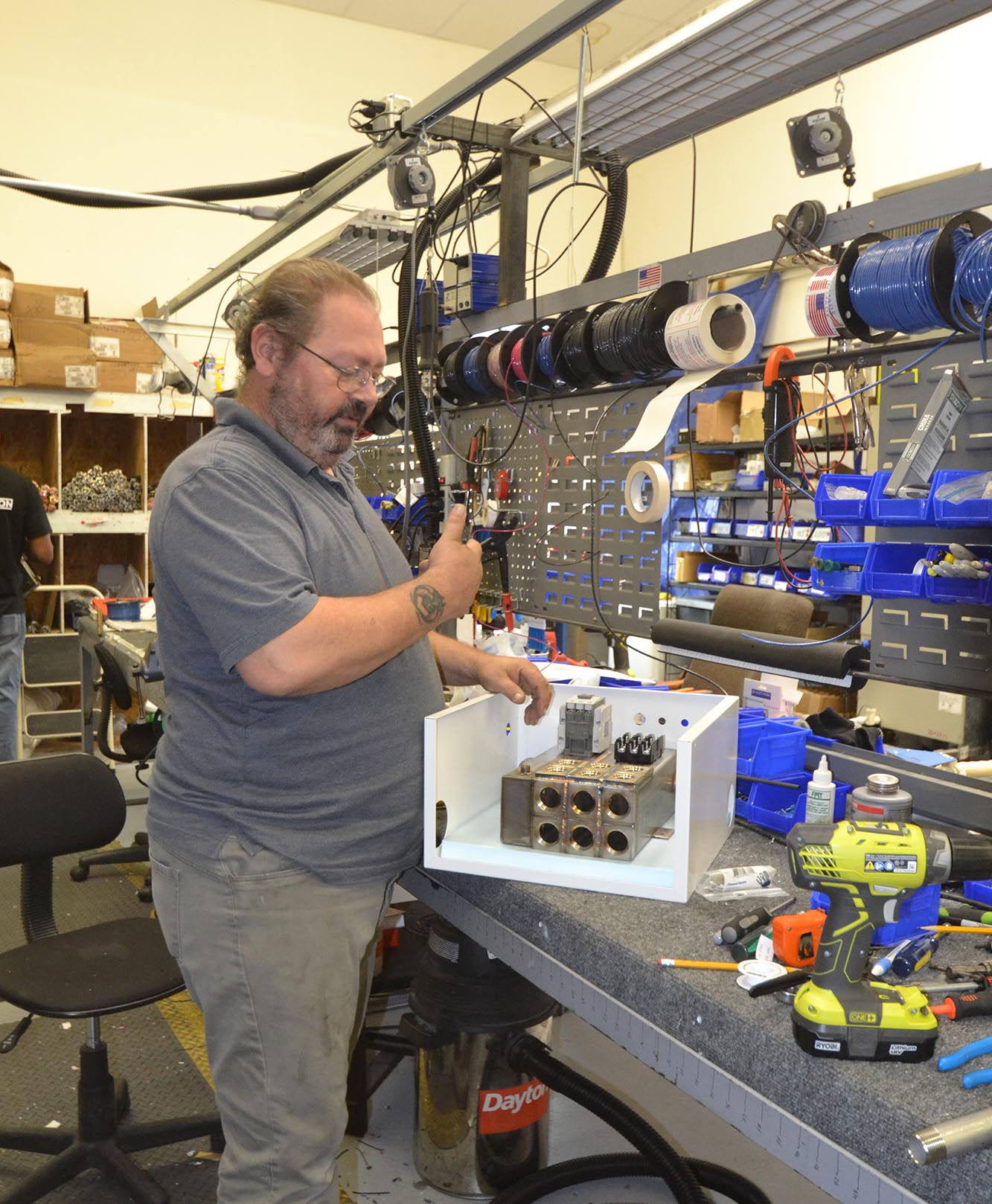 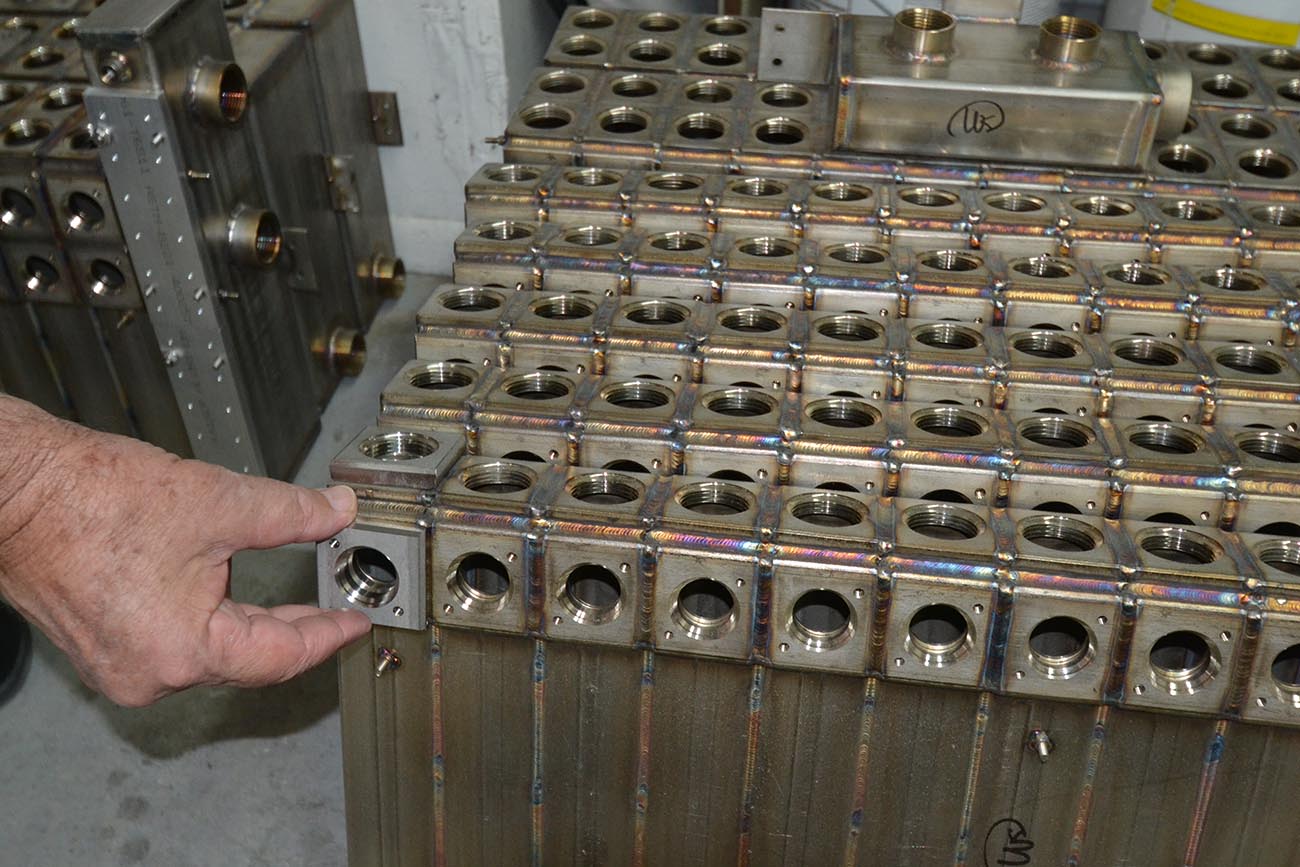 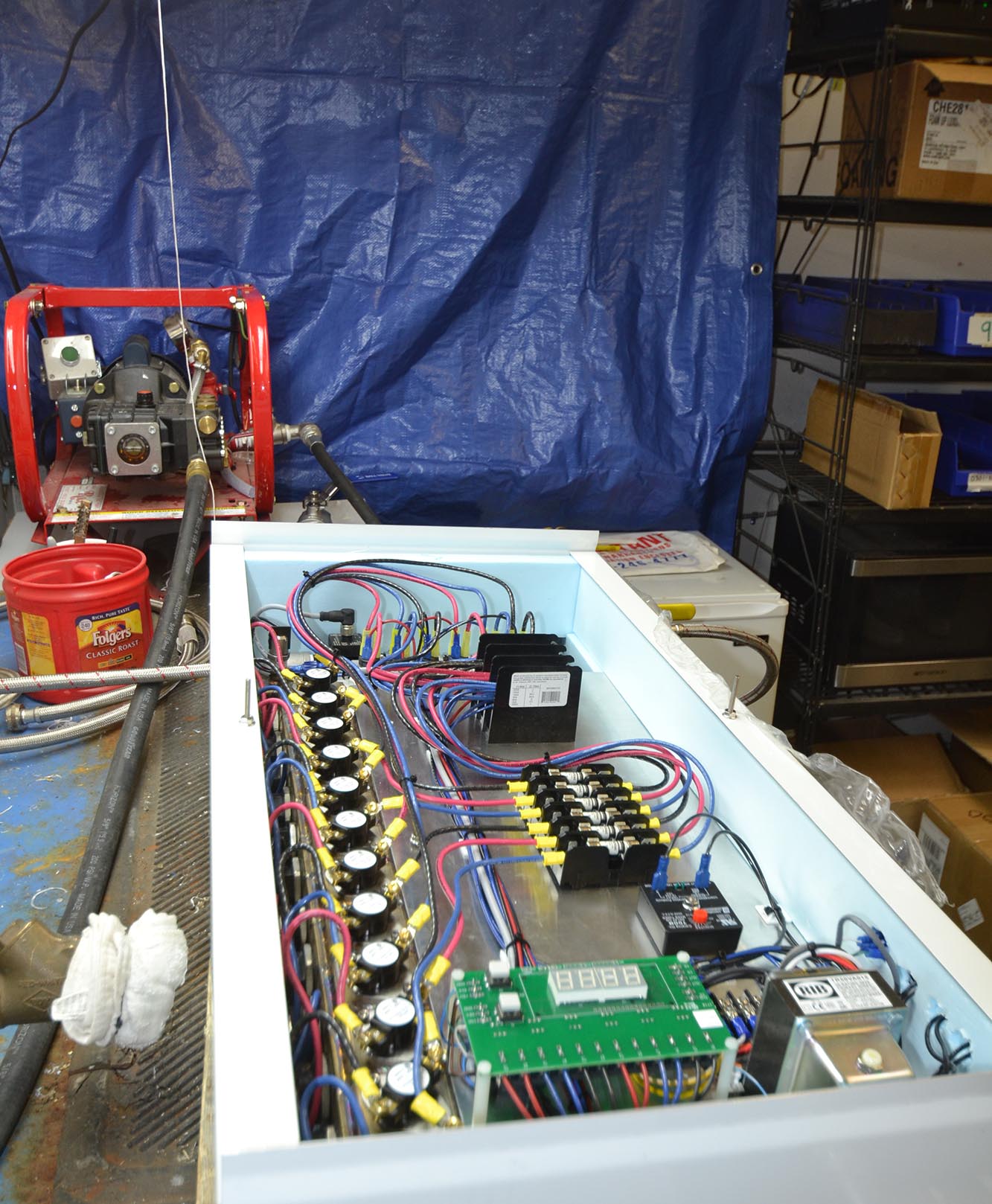 Immediately he discontinued the residential line and began the process of streamlining and improving the 3-phase commercial line of units. Large commercial water heaters are so specialized for the task, it’s one of the few volume production lines that still requires a great deal of hand-work. It’s the same across the industry. Some very large manufacturers treats their commercial line of tanked water heaters as a largely custom-built item.

When assemblers receive a bill of materials for a unit, they build it from beginning to end, taking it through each step of the process. “Everything is made to order,” says Wes Palmer, plant manager.

“We take sheets of aluminum and we brake them–bend them–and we make our own boxes in-house currently,” he says. Soon the enclosures will be out- sourced to another local company—just down the street—to speed up production. This is the type of streamlining Frank has brought to the company. Commodity-type items that don’t require a great deal of skill to produce are outsourced to shops that can provide as good or better item at the same price as it could be created in-house.

“It takes a certain number of hours to be able to put a unit together,” says Palmer. “If I can slim that down, it’s good. So if it takes two and half, three hours to make the box alone and I can buy one just as good or better, that way two guys or three guys can act like six.”

Palmer says people are often surprised to learn the higher capacity 3-phase commercial units are built by hand. “Everybody says, ‘You make them there? You’re not a distributor?’” he says. “I say, ‘We’re buying steel from Stewart Stainless and it comes in here cut, and we TIG weld it and we put this stuff together and send it out the door. So we handle sales, marketing, production, purchasing … you name it, we handle it.” And this allows them to focus on quality control and end-user happiness as their over-arching goal.

Each unit is assembled to exact specs with sizing of the heating elements specific to the task of each unit. Before a unit ever starts down the production line, the designer wants to know some specifics about the desired use of the unit to make sure the unit will meet the end-user’s expectations and deliver hot water as expected. Units move through the assembly process with great care taken to assure electrical connections are precise and proper with a second set of eyes looking at most every aspect of assembly of each unit that comes down the line. During the build, the assemblers check one another’s work. “We do it in stages,” says Chris Tarpley, production assembler. “Whenever [another assembler] does his control wiring, I come and check that. I also like to check the math to make sure that we’re putting the right size elements based on the kilowatt requirement for that unit.”

Palmer says that every unit has to be tested before it goes out the door. Stiebel Eltron recently invested in upgrading the facilities at Tankless, Inc. to not only increase capacity but also make the testing safer and more secure.

“I can actually live test from 208 all the way up to 600 volts with our units,” says Tarpley. “It usually takes about a half- hour to do all the testing that’s involved.” According to Tarpley, they place a great deal of emphasis on testing before units ship in an effort to eliminate problems with the units in the field.

Orders for these high voltage tankless commercial units are growing at a brisk pace, and Palmer is making sure they keep up with demand. “I’ve got enough welding capacity, and we’re interviewing for more assemblers,” he says.

“The good thing about this organization that I really like,” adds Palmer, “is everybody gets along with everybody. We have a good time. Everybody works.”

And Stiebel Eltron’s customers are happy as well. They now have a full commercial line of electric tankless water heaters from 1.8 kW – 144 kW. This complements their smaller commercial point- of use models from 1.8 to 36 kW and of course their popular residential models.