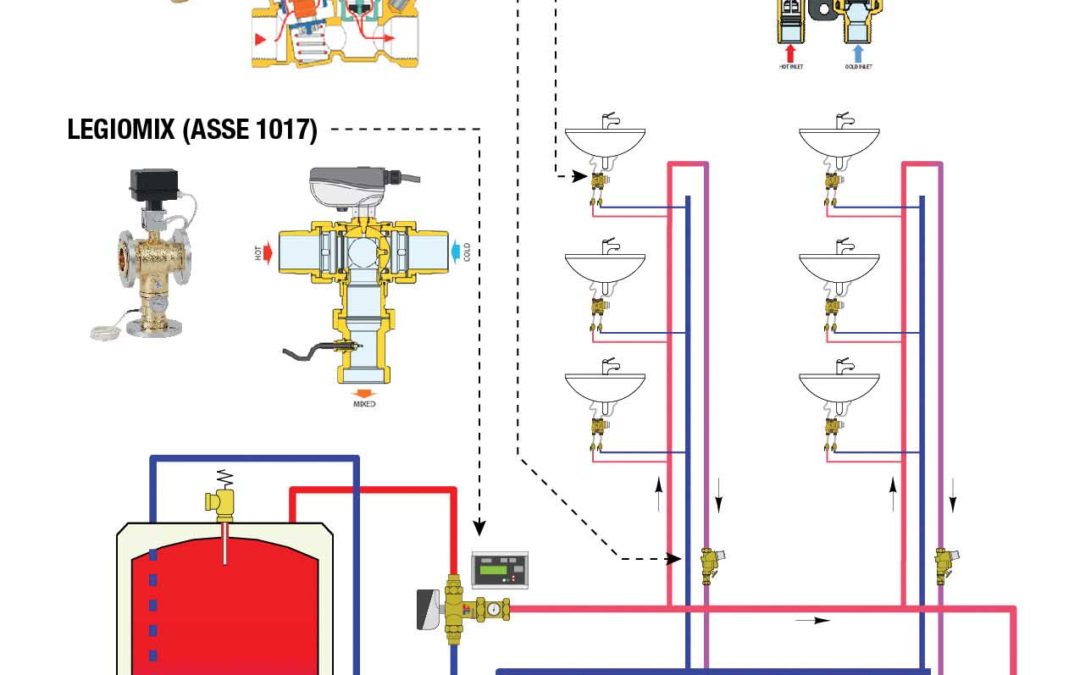 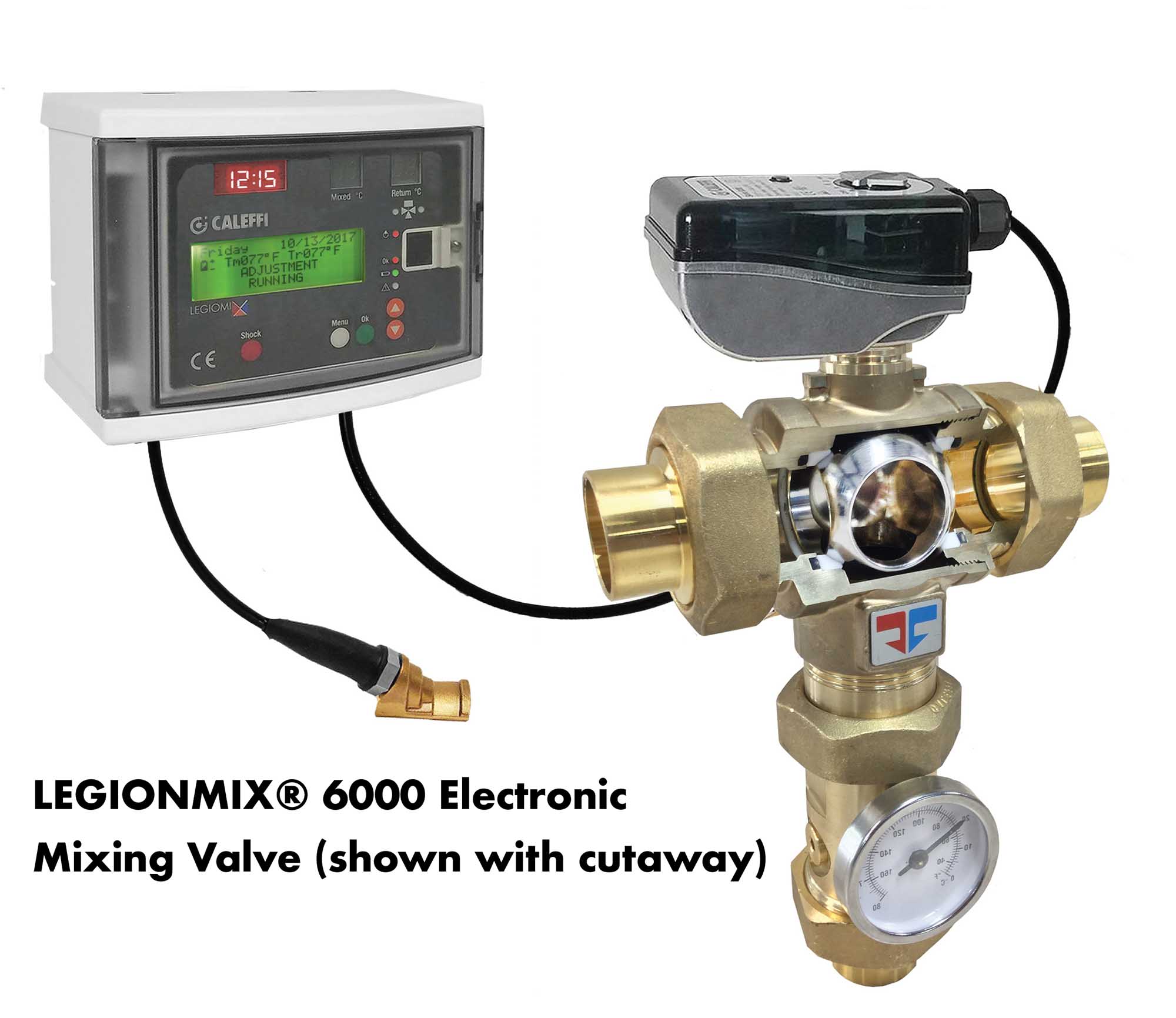 How do we reopen commercial buildings safely while minimizing Legionella bacteria growth in plumbing lines? This is the second article in the series, focusing on electronic, point of distribution mixing valves. These mixing valves are key in automated, thermal disinfection.

The valves are in charge of two primary functions.

First, ASSE 1017 point of distribution mixing valves supply a consistent hot water temperature to the domestic hot water fixtures, while keeping up with fluctuating hot water demand. In normal operation, point of distribution mixing valves keep the DHW heater from cycling unnecessarily and prevent overshooting recirculation target temperatures. Some models, like the Caleffi LEGIOMIX®, use a ball valve control element to reach high flow rates with low pressure drop. These valves aren’t scald protection devices.  ASSE 1070 point of use mixing valves are the scald defenders. A combination of both of these devices is important in a thermal disinfection system.

Here is an example of a typical thermal disinfection schedule. The exact temperatures will vary, depending on the building and can be configured in the control. During normal operation, the point of distribution mixing valve will be programmed to maintain a set point of approximately 130°F. During a period of low demand, potentially at 4 AM on a weekend, the mixing valve is programmed to increase the set point to a temperature that would kill legionella bacteria in the recirculated lines. It will automatically increase the supply temperature until the control verifies that 151°F makes it all the way around the building to the return sensor, back in the mechanical room.

This temperature will kill Legionella bacteria in the recirculation path in under two minutes, however, most piping systems have some amount of scale and/or biofilm where the bacteria can hide so 30 minutes is a reasonable time duration. Disinfection frequency and time duration will depend on the recirculation system size and age. Older systems with significant pipe corrosion and biofilm may require nightly disinfection.

After the valve confirms the proper disinfection temperature for the proper amount of time, it goes back into normal operation. No handholding or lever pulling required. Even in thermal disinfection mode, the point-of-use mixing valves make sure no more than 120°F leaves a tap. Valves like the Caleffi SinkMixer™ come set to 113°F. Thermal disinfection cycles are typically scheduled for low occupancy timeframes, in order to heat up the lines quickly. Even if one person is up at 4 AM to take a shower, point-of-use mixing valves will protect them from scalding.

Alternatively, a plumbing system can be disinfected with chemicals, like chlorine. Municipalities add disinfection chemicals to the water they distribute to homes. However, adding chemicals to the DHW system in a building is a very complex game that can require downtime for time-consuming flushing to make sure occupants don’t drink concentrated doses of chlorine. If you add chemicals on site, you are also now required to maintain EPA Safe Drinking Water Act compliance, which tests for 90 contaminants that interact with each other. Thermal disinfection doesn’t leave anything new in the water. It heats up and cools down, without changing the taste of a glass of water from a tap. You leave the EPA compliance issues and liability to the municipality.

Now that water is being mixed to specific temperatures at different times, we have to make sure it flows through the recirculation lines in a building evenly.

In next month’s column, we will discuss how balancing valves are used to direct flow to all of the branches of a system. This is an important topic because without proper balancing, proper disinfection may only extend to the shortest recirc loop. 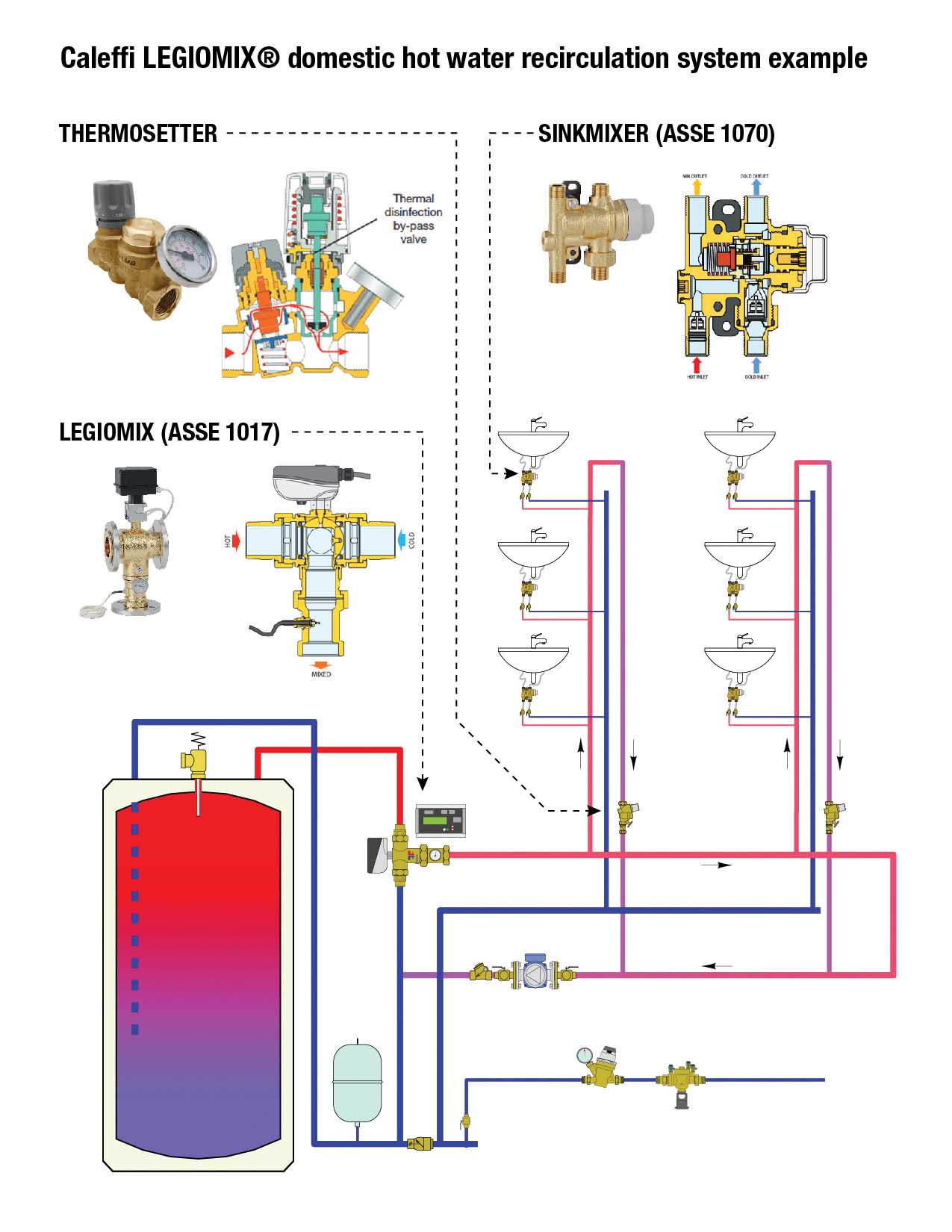 Max Rohr is an education and training manager at Caleffi North America. He is a graduate of the University of Utah. He has worked in installation, sales, and marketing in the plumbing, hydronics, and solar industries since 1998. Contact: Max.rohr@caleffi.com

For more information regarding minimizing the risk of Legionella, visit SouthernPHC.com/Legionella. 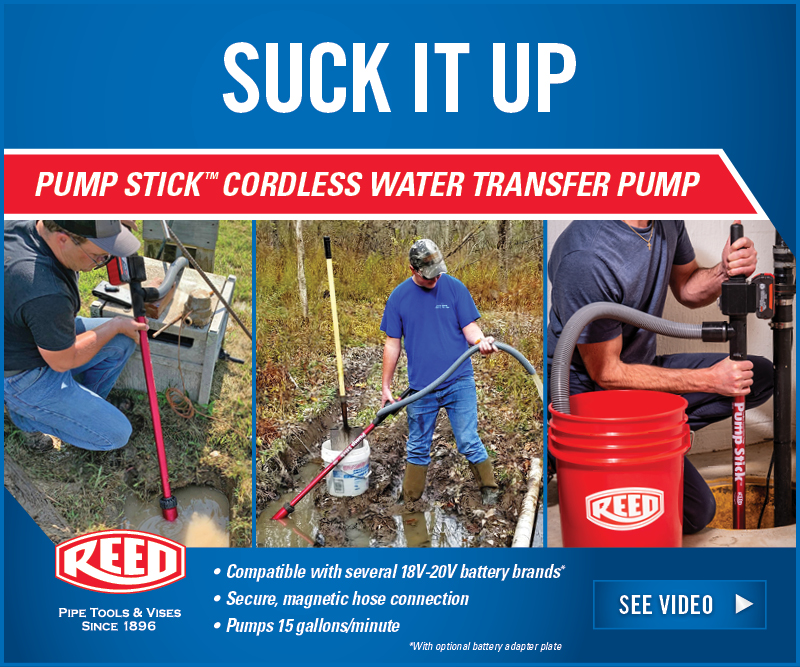